Indian stocks may still have room to run, if the historical price-earnings ratio against their emerging market (EM) peers is any guide.


While the S&P BSE Sensex Index is near the most expensive on record, its premium over the MSCI EM Index is only around 45 per cent, below its five-year average and down from 76 per cent in 2018.

Foreign investors have bought a net $6 billion of Indian shares this year — the only inflows to an emerging Asia market outside of China.


“The broader market is still fairly undervalued,” said Sumeet Rohra, a fund manager at Smartsun Capital Pte in Singapore, adding that gains have been concentrated in a small number of stocks.


Nearly half of large-cap funds, over half of equity linked saving schemes (ELSS) and over three-fourths of composite bond funds have underperformed their respective indices in the year to June 2020, a report said on Thursday.


The latest S&P Indices Versus Active (SPIVA) compared the performance of actively managed Indian mutual funds with their respective benchmark indices over one, three, five and ten-year investment horizons.


The story is similar over a longer term horizon as well, it said, adding 67.67 per cent of large-cap funds underperformed the large-cap benchmark over the 10-year period ending in June


Emerging-market stocks are on the cusp of reaching their highest level since 2018, and all they need may be more evidence of further growth in China, stable earnings and signs of more dollar weakness to take them there.


The MSCI Emerging Markets Index has gained more than 50 per cent since reaching this year’s low in March. At 1,137.75, it’s less than 15 points away from surpassing this year’s peak reached in January, and eclipsing that level would take the benchmark to highest since mid-2018. Strength in Chinese equities — the biggest component on the equity gauge — and earnings upgrades across developing economies that are beating the rest of the world are helping propel the gains.

Developing-nation stocks have made a comeback in October, amid optimism over vaccine advances and as signs of progress in US stimulus talks sent the


The IPO comprises fresh issuance of shares worth Rs 50 crore and offer of sale to the tune of Rs 500 crore by existing shareholders, according to the draft red herring prospectus (DRHP) filed with Sebi.


Net proceeds of the issue would be utilised for financing the project cost towards expansion of the Rajpura manufacturing facility by establishing a new production line for biscuits and for general corporate purpose.


Listed companies spent Rs 36,000 crore on research and development (R&D) — just 0.9 per cent of revenues. As a percentage of GDP, R&D spends in India have averaged 0.7 per cent in the past six years, ICICI Securities’s analysis showed.


India’s R&D spends are “relatively low as compared to other emerging economies (1-1.5 per cent) and significantly lower than developed economies and China (more than 2 per cent),” said Vinod Karki, Siddharth Gupta, and Anagha Deodhar, analysts at the brokerage. 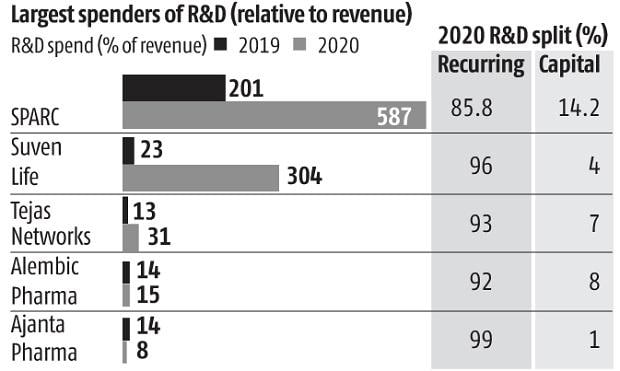 Business Standard has always strived hard to provide up-to-date information and commentary on developments that are of interest to you and have wider political and economic implications for the country and the world. Your encouragement and constant feedback on how to improve our offering have only made our resolve and commitment to these

Soybean at the benchmark Indore markets traded at Rs 4,145 per quintal; Chana price is expected to move up marginally from Rs 5,475 to Rs 5,525-5,550 per quintal in the Delhi market


Festive demand is expected to bring back buyers after the recent correction in the price. Delay in beginning of sowing in southern India will lend support. For the week ahead, the price is expected to move up marginally from