The holidays are here and with the usual merriment comes the constant stream of holiday cards. Most of us keep and display the ones sent by friends and family. Holiday cards from businesses? They’re nice, but honestly, they usually go right into the trash.

But then there are the cards sent by Jesse Guma and Lowell Freedman, two guys who run a production company called Grand Street Media that Entrepreneur has worked with over the years.

Most businesses play it safe with a relatively bland, politically-correct “Season’s Greetings” card. But not these guys. Each year they outdo themselves, coming up with an inventive way of turning what most businesses think of as an afterthought into something fun and engaging that makes them stand out with their friends, family and, most importantly, their clients.

Related: 4 Tips to Fight Employee Disengagement During the Holidays

We picked their brains to find out why they put so much effort into this, and how it translates to the strength of their business.

Why did you start making these cards?

Jesse: We came up with our first card back in 2011. The holiday season can be slow for us, and we were sitting around the office talking about how we’d been receiving more and more of those formulaic holiday cards of the happy family smiling into the camera. So we thought, “Hey, let’s do our own ‘best friends’ version of that and send it to family, friends and clients.” We ended up having so much fun doing the photoshoot and got such great feedback, that we knew instantly we’d have to do it again the next year.

Lowell: I mean, we got calls out of the blue from people telling us how much they loved the card, and how it was displayed front and center on their mantelpiece. It was something we just did as a gag, but it turned out to really make people happy.

What goes into the making of these cards from start to finish?

Lowell: If you get to Thanksgiving without a solid idea for the card, you could be in trouble getting it out on time. Obviously, it takes a little more effort than buying a box of cards from a store. You have to come up with an idea and execute on that idea, which could mean finding the perfect location or renting costumes or commissioning artwork. Then, once the card is finished, they need to printed and mailied. We actually like to do the mailing ourselves, because we use custom-made stamps with our stupid faces on them. Sounds over the top, but it’s a nice touch that when people notice and get a huge kick out of. Overall it’s a long process that can take up to 3 months from planning to when they get mailed.

What effect has it had on your business?

Lowell: We’ve been doing this for almost ten years now, and I can’t tell you the number of times we get emails from clients after they’ve received the card thanking us for remembering them and telling us how ridiculous the card is, or how they’ve put it at their desk or displayed it in their home and it’s become a conversation starter for them. The card helps remind people about us, and sometimes it leads to more business. There have been years where clients we haven’t worked with in ages get the card and they remember us. “Oh yeah, I like these guys. They’d be perfect for this project.” That’s just a silver lining after putting a smile on people’s faces.

Jesse: It’s hard to quantify the effect it’s had on our business, but we’ve definitely gotten a few calls for jobs very shortly after sending the cards, so I can confidently say it’s had a positive effect.

Jesse: Wow, that might be the toughest question you’ve asked. Your journalism skills are on fire! I have to say I love them all, but if I had to pick one it would be the Creation of Adam card. We could have taken the easy way out and photoshopped our faces on a copy of Michaelangelo’s original, but we took it a step further and actually commissioned an artist to hand paint the entire thing, oil on canvas. It currently hangs above our desks. And we look magnificent, so that’s a plus. 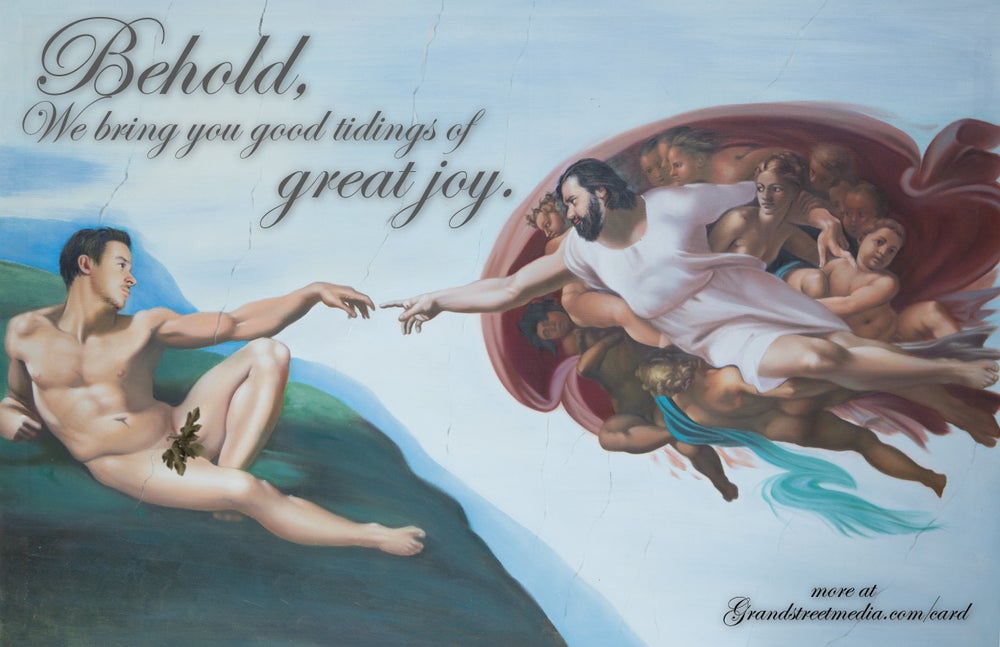 Lowell: My favorite has to be the Miracle on 21st Street card, which required us to get costumes and props. Just doing the shoots for this card was so much fun. I think we did a great job of recreating iconic Christmas movie posters. If you compare them to the originals, they’re really indistinguishable. I mean, somehow Jesse looks more like a 12-year old girl in a pea coat and beret admiring Santa than Mara Wilson. It doesn’t get better than that. 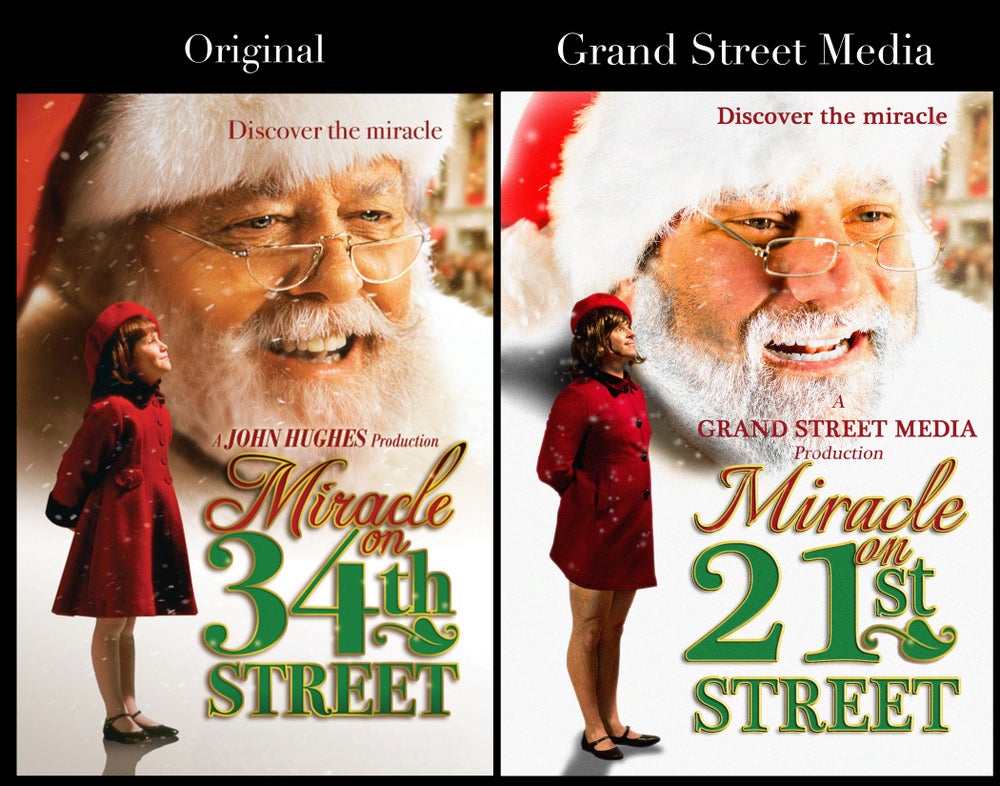 So what can you tell us about this year’s card?

Jesse: I think we have all had a similar experience of the dumpster fire that is 2020.

Lowell: Not much else needs to be said. We wanted to have fun with the shit show year we have all had but also encourage people to hang in there and things will get better. 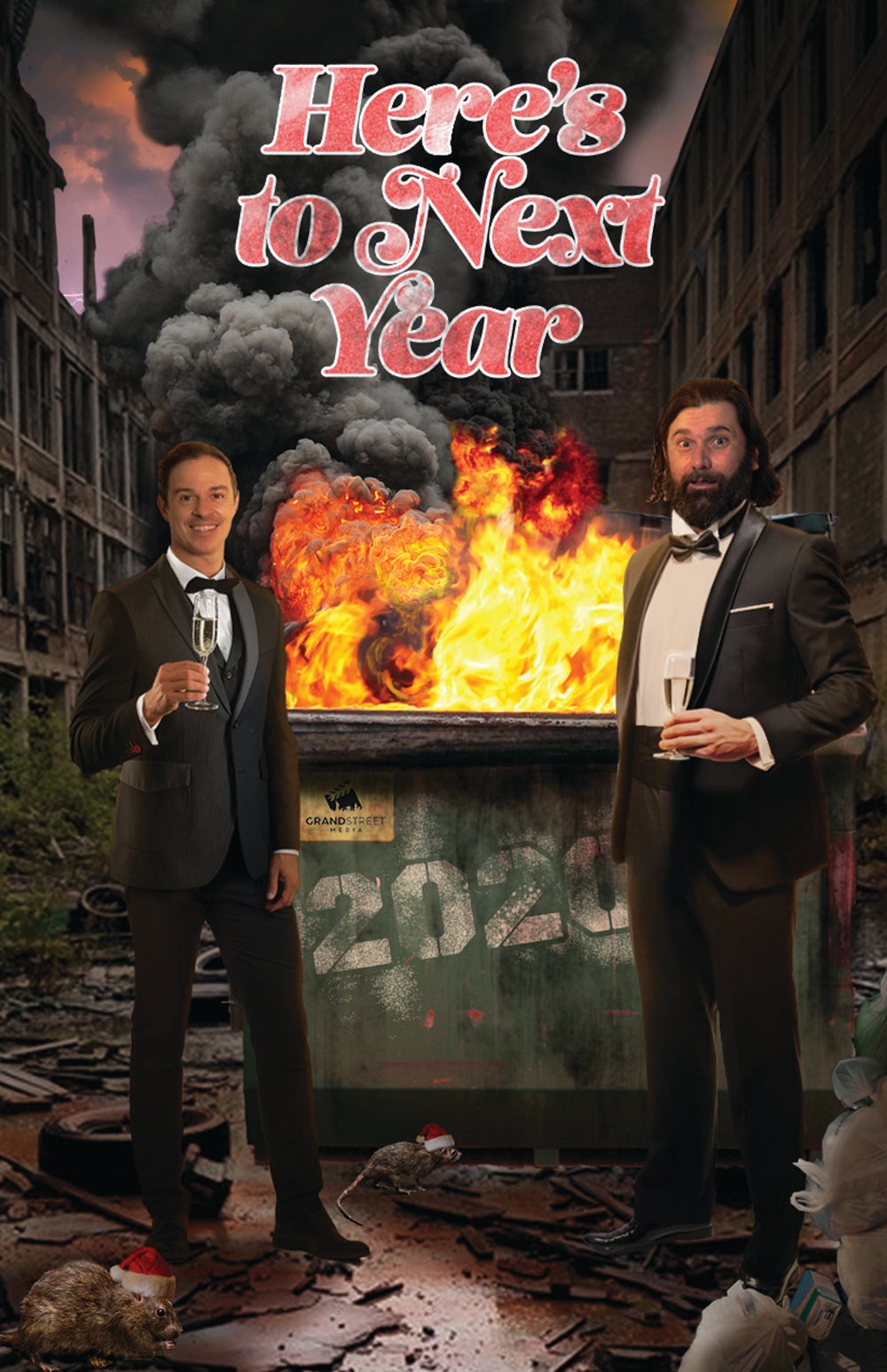 Check out all of Grand Street’s cards here.