Opinions expressed by Entrepreneur contributors are their own.

I was born in New York and raised in Ghana. When I was 16, my parents saved enough to send me back to the United States. My first job was at a McDonald’s. Since then, I served in the Air Force and created content and technologies for the likes of Boeing, Lucasfilm, Universal Music, Miami Children’s Hospital and Microsoft Xbox. Today, I am the head of CEEK Virtual Reality, where we are working to create innovative content solutions and tools for virtual reality and augmented-reality experiences.

As a business owner, the looting breaks my heart. But we’ve been trying to talk about inequality and systemic racism for so long. It took seeing George Floyd die in front of our eyes for the world to confront it.

For blacks in tech and blacks in business, we’ve been saying we can’t breathe. We’ve been denied opportunity based on the color of our skin. Over and over, we’ve been told, “You are not wanted here, we will not support your kind.”

It’s a bit hypocritical when I see some of the same Silicon Valley VCs who have denied opportunity to people based on gender and race holding up signs that say, “I can’t breathe.” This has been going on for way too long, and it’s time for it to stop — not just on the streets, where people have been bleeding to death, but also in boardrooms and the startup community and all these different places where the doors have been locked.

I’ve had investors say to me, “I want to put someone else in the role as founder, because I’m not going to go and raise capital in Silicon Valley with a black woman. It’s too difficult.” Why should that matter? I’ve created patented technology for Boeing. I’ve put a satellite in space with my signature on it. Over and over again, you are denied opportunity because of the color of your skin.

The question gets asked, “Where is the black unicorn?” Does anybody wonder why we don’t have one?

I cried for George as a mother hearing her son say, “Momma, momma, momma.” Mama couldn’t save him. But I also cried because as an innovator and black woman in business, I’ve felt no different. It’s like the world is just standing there watching, refusing to hear you. It’s a very sad place to be.

Related: Here’s How Business Leaders Are Responding to the George Floyd Protests

Spio sitting inside an Air Force jet during her time as a military technician.

When you look at organizations and their leadership, look at how much diversity is recognized. Write to them and demand that they build a diverse organization that represents that platform. If we are not in the room to speak, no one is speaking to it. In the words of Martin Luther King, “In the end, we will remember not the wickedness of our enemies but the silence of our friends.”

This is not about, “Poor me, save the Black woman.” Women-owned businesses are outperforming other businesses despite the hurdles. It’s the whole concept of the wounded deer jumping the highest. We have to be very innovative. We’re very careful about how we’re spending what comes in. It’s a necessity to open the aperture and let other people with other perspectives come in. Something like George’s murder is a catalyst to have these discussions openly and say, “Let not his death be in vain. Let’s not protest black and blue and forget green.”

There is a solution: We all have to work together. We have to be vigilant. If we see something we believe is not right, we need to talk about it and not wait for things to get to where they’ve gotten. We’ve seen communities come together, and they will continue to come together. And some people are reaching out and saying, “I need to look more closely at how I’ve operated in the past because I realize there’s room for me to improve.”

There are a lot of people whose dreams are being killed on these streets. There are a lot of people being killed in other ways that we need to think about it, especially when it comes to business. The only way things will change in business is if people protest racist, sexist systems by holding VCs that take from pension funds accountable.  If you work and put money in a retirement fund, make sure you know where that fund is being invested and demand accountability. You can voice your frustration by holding platforms that have little to no representation in their leadership accountable. Make businesses with discriminatory practices accountable. 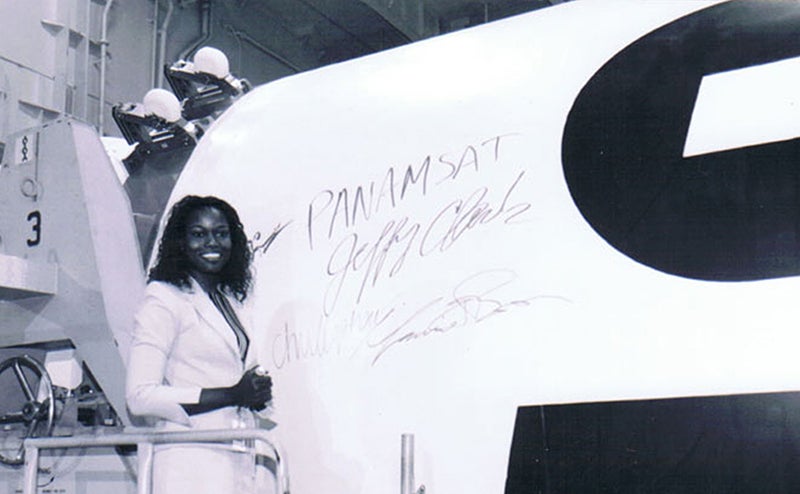 Spio signing one of the deep space rockets she helped engineer communications for.

We must demand change, or the excuses will continue. When you look at the percentage of people of color and women that get funded in VC land, you realize Silicon Valley has had its knee on the necks of women and people of color for a long time. Social justice today must be inclusive of all facets — especially entrepreneurship.

We can not build a civilization for the world with only a small fraction of humanity’s brain power. Innovation should be inclusive. The world cannot continue to keep its hands in pocket and whistle and have discussions on why there are no black unicorns galloping alongside the Zuckerbergs, Bezoses and Musks.

Stop the apathy. Stop the excuses. Let us breathe!